You are here: Home / My Books / My Best Friend is a Viral Dancing Zombie 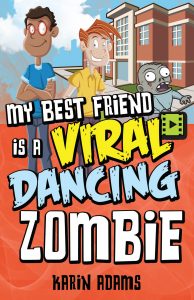 Riley and his best friend Finn are after top prize in their school’s online film competition. The only thing missing from their amazing stop motion zombie flick – the fans! But Riley’s plan to promote the big blockbuster at a hockey game quickly gets upstaged by Finn’s jumbo screen dance antics. Finn ends up famous…and Riley ends up furious. Can the boys’ movie making partnership – and their friendship – survive?

With fun-tastic zombie and movie making graphics – plus hilarious glimpses into Riley’s Movie Notebook – you’ll love joining Riley as he tries to prevent his best friendship, his action flick (and a secret crush!) from going ‘off script’!

(from CHAPTER ONE – RISE OF THE MIGHTY LIZARD BEAST!)

On the ride home from school, Riley and Finn talked non-stop about their movie.

“I’ll make a soundtrack on your keyboard,” said Finn. “And some homemade sound effects . . .”

Their ideas were flowing like molten lava from an erupting volcano.Riley grabbed his movie notebook from his backpack. He turned to a fresh page to write everything down. He wasn’t going to let a single thought slip away!

The Cast:
Riley as “Rocket”
Finn as “Flapjack”
Slow-Mo the bearded dragon as “Lizard Beast” (voice by Finn or Riley)
Riley and Finn as Various Zombies

Lizard Beast’s private island is under attack from an army of Special Ops soldiers who have turned into zombies. Two soldiers — with the code names “Rocket” and “Flapjack” — are immune to the zombie virus. They become Lizard Beast’s allies. The three best friends must work together to defeat the Zombie Horde . . . but time is running out!