You are here: Home / My Books / Lights! Curtains! Cows! 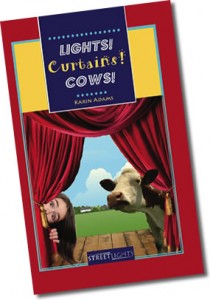 Each summer in Ellis, Manitoba, Frank Derksen stages “The Legend of Cow Valley”, a play about an exciting town legend. Traditionally, the town’s grade-seven kids are the stars. This is all about to change when Mr. Derksen sells part of his farm to the government as a historic site.

There is no greater fan of The Legend of Cow Valley than Becky Kowalski, who has dreamed all her life of playing Catastrophe Cate, the show’s hero. When the play is going to close for good, charistmatic Becky rallies her best friend Greg and the rest of their grade-seven friends to save it. However, Ms. Noring, the stern government official  in charge of the new historic site, stands in the way of their plans. Worst of all, Ms. Noring is planning to stage a new play that the kids recognize instantly as an incredible flop.

With determination and plenty of hilarious twists and turns, Becky, Greg and their friends begin to practice The Legend of Cow Valley in secret and plan a surprise performance for the town. But with an adversary like Ms. Noring, can they really pull it off?

CHAPTER ONE – Curtains For Cow Valley?

I slammed my locker door. “I can’t believe it!” I said.

“Get a hold of yourself, Greg,” said my friend, Mike Leduc. He glanced up and down the hallway, looking nervous. It was crammed with students hurrying to class.

“No more Legend of Cow Valley?” I asked.

“For the three-hundredth time, yes! That’s what my dad told me,” Mike said. “Now would you keep your voice down, Neufeld? I had to promise not to say.”

I lowered my voice. “He’s absolutely positive that Mr. Derksen is cancelling the show?”

“Even though it’s finally our turn to star in it?”

“I don’t think that has anything to do with it,” Mike said.

This was crazy! The Legend of Cow Valley was a play performed on Mr. Derksen’s farm every summer for only about the last gazillion years! It was a tradition in our town, Ellis, Manitoba, for the grade seven kids to be the cast.

“How can this be happening?” I wailed. “Every kid in Ellis waits their whole lives to be in Cow Valley. It’s practically the law!”

“My dad said that Mr. Derksen is selling part of his farm to the government,” Mike said. “They’re going to build a museum, or something.”

“But Cow Valley has lots of historic parts already!” I said, trying not to shout. The story of The Legend of Cow Valley takes place in Ellis over a hundred years ago. My mom said that like most legends, it wasn’t exactly a true story, but that lots of stuff in it was based on history. For instance, the play got its name from Ellis’ old nickname “Cow Valley” (because of all the cattle farms in the area, of course). Some of the characters in the play were named after real people who had lived in Ellis in the olden days. And then there is the outdoor set, which looks like a street from a cowboy movie. My dad told me that Mr. Derksen had studied black and white photos of Ellis’s Main Street from a hundred years ago when he built the set, to get the details just right. That was pretty “historic”!

“A museum won’t be the same. It can’t possibly be as fun as Cow Valley!” I said.

Who is Lights! Curtains! Cows! for?

I came across a terrific quote the other day from none other than Mark Twain. Since nobody says it better than Mr. Twain, I’d like to use his words to express who I think should read Lights! Curtains! Cows!:

“Although my book is intended mainly for the entertainment of boys and girls, I hope it will not be shunned by men and women on that account. For part of my plan has been to try to pleasantly remind adults what they once were themselves, and of how they felt and thought and talkes, and what queer enterprises they sometimes engaged in.”

Mark Twain, Preface to The Adventures of Tom Sawyer, 1876

In other words, young readers – this book is for you! But parents and grown-ups, I hope you can join in on the fun, too!